Have you ever swung your way through a molecule? You can in Olafur Eliasson’s outdoor sculpture, which mixes art with architecture and play.

It’s a marvellous sight, and never fails. Most school classes take a climb through Olafur Eliasson’s dome-shaped sculpture 8900054 when they pass it on the way along the path to the main entrance of ARKEN. Sometimes it is simply swarming with small arms and legs waving, hanging and climbing, to the sound of happy shouts.

The sculpture has something futuristic about it. It consists of two dome-shaped steel structures partly buried in the ground. Try imagining that the two domed parts are in reality two whole spheres that have been buried.

A pure structure, perfect for play

It is a pure structure that Eliasson has blown up in size, a piece of enlarged nature. At the same time there is something functional about it as a strong architectural principle. The sculpture is also perfect for play, whether you imagine that you crawl all the way into the interior of a molecule and see the world from this point, or you just have the urge to challenge your own strength by swinging by the arms through the holes in the network beneath the dome.

The two parts of the sculpture, one large and one small, are constructed with a network of pentagonal and hexagonal steel rings. The title 8900054 doesn’t refer to anything in particular, but it sounds technical and scientific. The construction of the sculpture recalls an architectural structure that the American engineer Richard Buckminster Fuller patented in the 1950. It is so solid that it is used, for example, for giant stadiums.

But there is more. In 1996, the same year as 8900054 was made, three researchers won a Nobel Prize for discovering a new type of molecule. The molecule group, which was called ‘fullerenes’ after Buckminster Fuller, consists of dome-shaped carbon molecules where the atoms are grouped in pentagonal and hexagonal rings as in Eliasson’s sculpture.

Olafur Eliasson’s art is highly involving and experimental. Many of Olafur Elias¬son’s materials are taken from nature or refer to natural phenomena which are often connected with his own Danish-Icelandic origin; for example water, ice, light, moss, mist and stone. Even in his large graphic series of aerial photographs mapping the Icelandic landscape, for example, nature is at the centre as a point of departure for investigating how we actually perceive the world with both body and brain.

In his sculptures and installations he draws on both the sensory resources of art and scientific experiments to create situations where you can experience the world in brand new ways and become wiser about what is happening while you experience the world. In many cases – for example in the encounter with the installation Your negotiable panorama, which is shown in periods at ARKEN – it is you yourself who influence the situation and create the experience.

B. 1967, Danish-Icelandic. Lives and works in Copenhagen and Berlin.

Studied in 1989-95 at the Royal Danish Academy of Fine Arts.

In 1995 established Studio Olafur Eliasson, where up to 75 technicians, architects, archivists, administrators, programmers, art historians and others work.

Eliasson’s international breakthrough came with the exhibition The Weather Project at Tate Modern in 2003-04, where he installed a giant sundial in the large Turbine Hall of the museum.

In 2008 he installed The New York City Waterfalls on the Manhattan and Brooklyn coastlines.

In 2010 ARKEN showed a 90 metre long mist tunnel by Eliasson, Your blind passenger, as part of the Utopia exhibition series.

Your Rainbow Panorama is a 150 metre wide circular viewing space in coloured glass that Eliasson built in 2011 on the roof of the ARoS museum in Århus.

In 2012, with the engineer Frederik Ottesen, he launched a solar cell lamp, Little Sun. This is a global social project meant to enable societies without access to electricity to have lighting.

For the installation Riverbed at the Louisiana Museum of Modern Art in Humlebæk in 2014 Eliasson filled the museum’s exhibition spaces with Icelandic stones and a waterway that ran through several rooms.

A boy on a rocking-horse waves a welcome on ARKEN’s forecourt. Elmgreen & Dragset’s equestrian statue pays tribute to play and fantasy rather than victory and power.

It has nothing to do with Jesus, even though they look like coffins. Instead try touching, sensing and playing with Peter Bonnén’s sculpture. 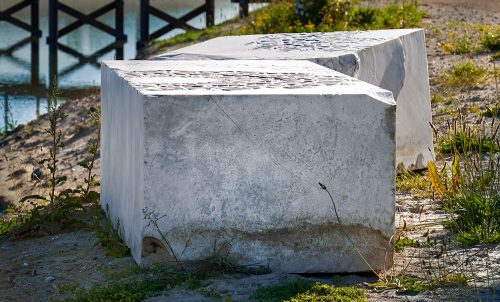 Where do you come from? Perhaps you’ll get to know more about your own culture if you let the palm of your hand slide over the sandblasted pattern on Eva Steen Christensen’s marble sculpture.

Erect, immobile and alone. What can Antony Gormley’s sculpture be on the lookout for?

We use Google Analytics, a third-party tool, to optimize the content of our website based on the most read pages.
My preferences Reject cookies Accept all Accept selected